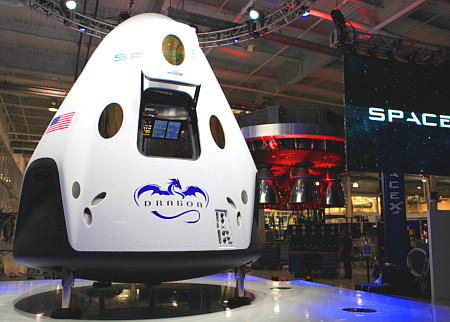 First manned flight will be preceded by a flight for delivery of equipment and materials required for the construction of the fuel production plant for rocket engines.

At first, Dragon spacecrafts will be sent to Mars to investigate the area. It is necessary for the development of spacecraft landing technology for avoiding craters formation. Also it will help to discover better ways to produce water that is available on Mars in the form of ice under a layer of dust.

After that, a spacecraft loaded with heavy-duty parts and self-controlled mechanical devices for plant construction will be launched. The latter will be engaged in tunneling and soil excavation if necessary. Only then people will be sent to Mars to build up the initial base and make the finishing touches on the fuel plant construction.

Raptor rocket engines powered by liquid methane and oxygen have been developed specifically for this flight. SpaceX plans to use boosters to determine the accurate spacecraft route. Capsules for reconnaissance are planned to be exploited several times being able to automatically return to Earth. To overcome such long distances they will get refueled in a low Earth orbit.

According to SpaceX calculations, it is possible to colonize Mars in just 40-100 years by sending there about 100-200 people each time. Possessing the engines of the latest models, it will take 6-9 months to reach Mars, but by the time of flight, technologies can improve and the abovementioned figures will exceed today’s expectations.

NASA can be considered as a main SpaceX competitor in terms of Mars exploration. Unlike Elon Musk’s company, which is going to send the first humans to Mars by 2025, the space agency has less ambitious plans and is going to send the Orion spacecraft to Mars only in the 30s.