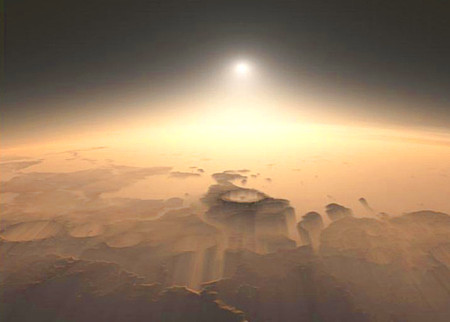 The colonization of Mars is one of the most discussed topics of the international scientific space community. The management of the SpaseX plans to send the first team of astronauts to the Red Planet in 2024. NASA announces more realistic date – 2030. Roscosmos has not set such mission for themselves but it is already known that they plan to explore the Moon as a precedence of their tasks implementation concerning the Mars.

At the VII International Symposium on the Exploration of the Solar System that took place in Moscow, the most suitable location for landing and base establishment has been specified: it is Deuteronilus Mensae area in the northern hemisphere of the planet, between the Utopia (Utopia Planitia) and Chryse (Chryse Planitia) plains. The radius of the area is 100 km.

At first glance it seems that there is nothing interesting to search for. But if we dig a little deeper then under a layer of dust, a huge deposits of ice can be discovered which in its turn can be used for household needs. It is there where scientists expect to find simple extraterrestrial life forms as well.